Anna is interested in the genetic basis of quantitative traits, such as body size, which are usually influenced by many genes as well as environmental influences. Most of the traits linked to survival and reproduction, and hence the overall fitness of individuals in a population, are complex and quantitative. Gaining an understanding of the genetic basis of these important traits in wild populations allows us to explore ‘evolution in action’ by taking into account complex, multivariate, real world scenarios to help explain and predict the adaptive potential of populations.

Annabel Whibley is a Research Fellow in the School of Biological Sciences. She is fascinated by how adaptive traits evolve in natural populations, and increasingly leverages powerful genomics technologies in combination with more classical genetics approaches to address these questions. Most recently Annabel has been searching for functional variants and genomic architectures that account for colour pattern differences in Antirrhinum (snapdragon) flowers and Heliconius butterfly wings but also has an interest in exploring any systems that offer the potential to provide insights into the mechanisms of evolutionary processes.

With our collaborators Rebecca Johnson and Richard Major at the Australian Museum Research Institute, Sydney, Annabel is currently working to improve the draft genome of the Indian myna (Acridotheres tristis) ahead of hopefully developing this as a model system to investigate whether transposable element activity plays a key role in facilitating adaptation in invasive species. 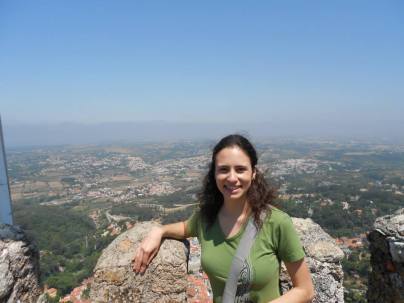 Priscila M Salloum is a PhD candidate at The University of Auckland, supervised by Dr Shane Lavery and co-supervised by Anna Santure and Pierre de Villemereuil. Priscila completed a Bachelors and Teaching Degree in Biological Sciences and a Masters Degree in Genetics and Evolution at the State University of Campinas (Brazil). In her Masters Degree, she was supervised by Professor Vera Solferini and studied factors affecting the genetic variability and population structure of marine invertebrates, with a project focused on the Brazilian smallest seashore winkles (Echinolittorina lineolata) and the genetic patterns exhibited by them in two neighbouring locations. Priscila is also interested in education, having worked as a biology and science teacher in two Brazilian secondary schools.

For her PhD, Priscila is assessing the connectivity and local adaptation of the chiton Onithochiton neglectus, a marine invertebrate that has reduced mobility and invests high amounts of energy in brooding their eggs. Priscila is trying to understand the role of neutral and adaptive factors in shaping their population structure across the New Zealand latitudinal gradient.

Caroline Lees is a PhD candidate at The University of Auckland, supervised by Prof Jacqueline Beggs and co-supervised by Anna Santure. Caroline is a Programme Officer for the IUCN Species Survival Comission Conservation Planning Specialist Group and her PhD investigates the impact of conservation planning in species recovery, with a particular focus on evaluating science-based, inclusive and participatory species conservation planning.

Laura Duntsch is a PhD candidate at the University of Auckland under the supervision of Dr Anna Santure and in collaboration with Dr Patricia Brekke and Dr John Ewen at the Institute of Zoology, Zoological Society of London.

She obtained her Bachelor’s degree in biology from the Technical University Braunschweig in Germany, where for her bachelor thesis she analysed the phylogenetic diversity and structure of cutaneous bacterial communities among different body parts and habitats of fire salamander larvae. After a volunteering internship at the Rotokare Scenic Reserve, New Zealand, Laura completed her Master’s degree in Animal Ecology at Lund University, Sweden. In her thesis project, she investigated chromosomal regions associated with bill morphology in the endemic Nesospiza bunting of the Tristan da Cunha archipelago. Last year, she conducted an Animal Breeding Genetics internship in a multi-species breeding company in the Netherlands.

During her PhD, Laura will be using hihi (Notiomystis cincta) SNP chip data to validate the Tiritiri Matangi island pedigree and measure individual inbreeding levels within the population. She will make use of additional data on morphological and life history traits and environmental variables to investigate the strength of inbreeding depression in the Tiritiri Matangi population and to better understand the underlying genetic mechanisms. The goal is to identify loci with large effects contributing to inbreeding depression and to be able to make predictions about the adaptive potential of the species. 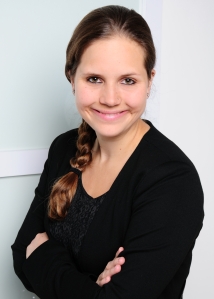 Christina K Flammensbeck is a PhD candidate at the University of Auckland under the supervision of Dr Maren Wellenreuther and co-supervision of Dr Anna Santure. Christina obtained her bachelor’s degree in biology and her masters’ degree from the Munich Graduate School for Evolution, Ecology and Systematics (EES), both from the Ludwig-Maximilians-Universität Munich (LMU) in Germany. For her bachelor thesis, Christina studied the microanatomy and ultrastructure of a vermiform nudibranch living in the mesopsammon (Pseudovermis paradoxus). Her Masters research estimated divergence times and phylogenetic relationships of deep-sea sharks (order: Squaliformes) using Bayesian inference.

For her PhD, Christina is based off-campus at the Plant and Food Research Institute in Nelson. Christina is going to study the genome and transcriptome of the Australasian snapper (Chrysophrys auratus) to understand molecular mechanisms underpinning temperature stress resilience. She is interested in the identification of key genes involved in adaptation to a changing climate, particularly in respect of increasing temperatures.

Alexis Rutschmann was a Research Fellow in the School of Biological Sciences from 2017-2018 and is interested in the transmission of extra-genetic elements from parents to their progeny. He is also very interested in studying different environmental characteristics that can shape the evolution of phenotypic plasticity.

He completed his BSc in Biology, Physiology and ecology in Strasbourg (Université de Strasbourg, France) and Montreal (Université de Montréal, Canada). During his Masters degree (Université de Montpellier, France) and under the supervision of Dr Isabelle Chuine and Dr Anne Duputié, he studied the adaptive potential of phenotypic plasticity under different climate change scenarios, using a process-based species distribution model. Then, he performed his PhD in the Station d’ Ecologie Théorique et Expérimentale (Moulis, France) under the supervision of Dr Jean Clobert, Dr Murielle Richard and Prof Don Miles. His work was mainly focused on the environmental determinants that shape plastic responses and life history trade-offs in the common lizard (Zootoca vivipara).

At the University of Auckland, Alexis was working on the influence of both genetic and spatial relationships between individuals on the heritability of life-history traits. He developed a pedigree for the Zealandia Karori Wildlife Sanctuary hihi (Notiomystis cincta) population and modified existing quantitative genetic models to determine the role of space sharing on phenotypic similarity between individuals.

Pierre de Villemereuil was a Research Fellow in the School of Biological Sciences from 2016-2017 and is interested in the study of adaptive phenomenons on a micro-evolutionary scale in wild populations. To do so, he combines approaches from evolutionary ecology, quantitative genetics and population genomics.

He completed his B.Sc. in Biology and Masters in Evolutionary Ecology at the École Normale Supérieure in Paris (France). In 2012, he started a Ph.D. in the University of Grenoble – Alpes (France) with Irène Till-Bottraud and Oscar Gaggiotti on the study of local adaptation in the Alpine plant Arabis alpina. During this Ph.D., he performed methodological developments as well as empirical studies (see more).

While in Auckland, Pierre was working on measuring the adaptive potential of the hihi, Notiomystis cincta, as well as the evolutionary constraints on this species, especially on the Tiritiri Matangi island population, by combining the pedigree and phenotypic data available over 20 years from the population. 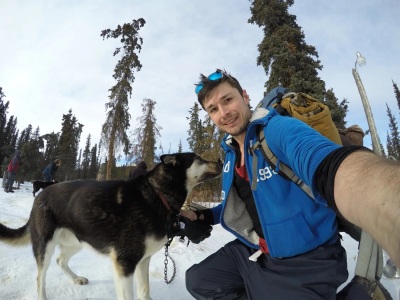 He received a BSc and MSc first class with Honours from the University of Canterbury. His Masters research investigated the population genetics of West African chimpanzees in Eastern Nigeria under the supervision of Dr Hazel Chapman and Dr Marie Hale. This project examined gene flow and sex biased dispersal in communities of chimpanzees inhabiting the region and included a population viability analysis of a small and potentially isolated community in a forest fragment.

For his PhD Alex investigated the genetics and epidemiology of coccidia, an intestinal parasite, of the threatened hihi (Notiomystis cincta), with particular focus on the population on Tiritiri Matangi Island, near Auckland. The work revealed that hihi juveniles are more likely to be infected with coccidia, and revealed genetic variants at toll-like receptor immune loci are associated with coccidial infection in adult birds.

Alex is now a Restoration Advisor for the Pest Free Kaipātiki project.

Stephanie Galla was a PhD candidate at the University of Canterbury under the supervision of Assoc Prof Tammy Steeves (senior supervisor) and Anna Santure (associate supervisor). Before arriving to New Zealand, Stephanie earned her BSc degree in Wildlife Biology at Murray State University and her MSc degree at the University of North Texas, where she studied the phylogenetics of North American prairie grouse (Genus: Tympanuchus). Stephanie’s broad research interests include the application of genetic and genomic data to inform the management of critically-endangered species.

Stephanie is now a postdoc at Boise State University. 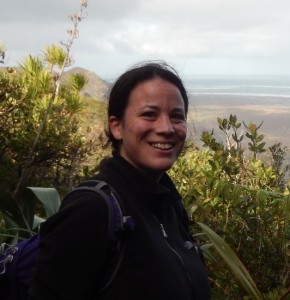 For her PhD, Kate developed a genomic toolkit for the hihi (Notiomystis cincta) and used this to investigate the accumulation of inbreeding as a consequence of translocation events and ongoing population bottlenecks. Hihi is an endemic New Zealand forest-dwelling bird, which were last seen on the mainland in 1883. A hihi recovery program has been operating since the 1980’s, and the birds have been translocated to predator-free islands and fenced wildlife parks with increasing success. In particular the birds on Tiritiri Matangi island have been monitored through every breeding season since they were translocated there in 1995 and their pedigree has been established by a microsatellite genetics study. 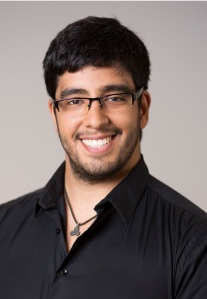 Supervised by Prof Joel Rothman (Department of Molecular, Cellular, and Developmental Biology at the University of California, Santa Barbara) and co-supervised by Anna Santure

Agustín is now an embryologist in Spain.

Phoebe is now working for a horticulture consultancy company in Tauranga.

Edwardo Reynolds – Honours student in Bioinformatics, 2016
Investigation of an imprinting effect in the bovine genome while accounting for high levels of population structure in linear and mixed models
Co-supervised by Dr Matt Littlejohn, Livestock Improvement Corporation

Edwardo is now a PhD student at Massey University

Sian is now a PhD student at Murdoch University